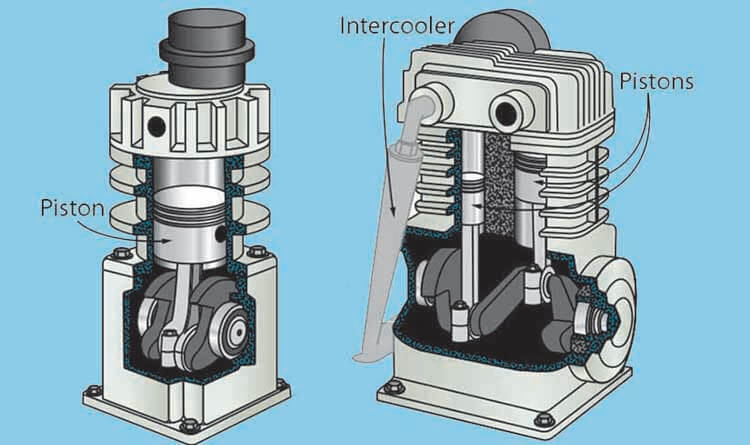 The basic function of an air compressor is to draw in air and then compress it for storing. Compressing air ends up increasing the pressure of air. This compressed air can then be used to deliver power to certain tools.

A single-stage air compressor has a piston that compresses the air once. The air that is drawn in is compressed to a pressure of 120 psi usually. Two cylinders are used, which both have their inlet valves.

After the first compression, the air is not taken to the storage tank but a second smaller piston, which compresses the air to a pressure of about 175 psi. It is then finally stored.

Since you have the basic rundown of the two types of air compressors, let’s compare them and see how they differ in certain aspects.

Two-stage or dual-stage air compressors compress the air to a higher pressure, so they produce higher power. They are meant to work with more powerful pneumatic tools that operate at pressures of 200 psi. Single-stage compressors produce lower power.

Two-stage air compressors are used in factories. They pump out more power and so they can be used with more powerful tools and can also power multiple tools at the same time, which is needed in a factory.

Nevertheless, let us know if you liked the two-stage vs. single-stage air compressor comparison guide.

About the Author Christopher P.

This is Christopher, An air compressor expert, having five years of particle experience in different types of compressor parts and lubricant. Here I am sharing my knowledge so you can learn.